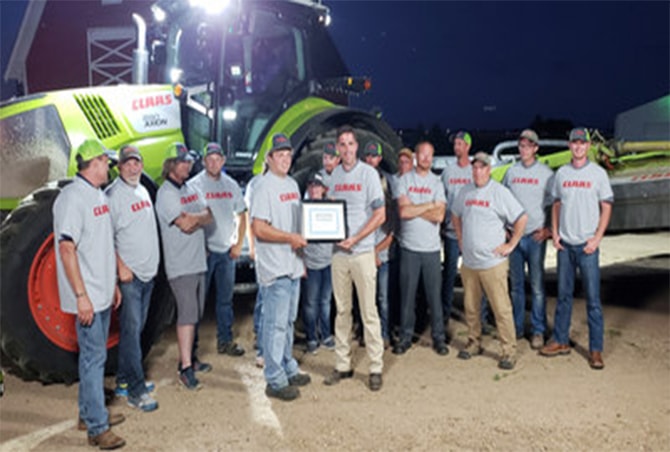 With the DISCO 1100 RC conditioner mower unit, CLAAS has set a new world record for the amount mowed in eight hours. During this time frame, the machine mowed a total of 141.1 hectares of alfalfa with a roller conditioner and an average yield of 5.24 tonnes of dry mass per hectare. The previous world record was thus surpassed by more than 40 hectares.

Record from the USA

On 1 July 2018, just after midday, Tate Mesbergen from Mesbergen Farms set about creating a new world record with a combination of AXION 800 and DISCO 1100 RC machines. Exactly eight hours later, he climbed out of the cabin of his tractor as a new world record holder. A support team and impartial witnesses can confirm that Tate mowed a total of 141.1 hectares in four different fields, thus exceeding the previous world record by more than 40.5 hectares.

With a maximum speed of 30 km/h in the field and more than 50 km/h from field to field, Tate mowed an average of 17.6 ha/h during his world record attempt. “Not all fields were close to one another, so it was a real challenge to quickly fold up the mower units for transport and hurry along the roads,” explained Tate.

Not everything went according to plan

The day before the attempt, there was a thunderstorm with heavy showers of 12.7 millimetres of rain. This meant that the subsoil in particular in the first field was significantly wetter than usual. The start was delayed by a few hours, and during his record attempt, Tate also made two unplanned stops. His first was between the first and second field. “I hit a piece of concrete on the first field and had to check whether the mower unit was damaged,” said Tate. A quick examination showed that no harm was done. Not one blade had to be replaced. The second interruption took place to check that the DISCO mower unit was correctly folded before it was transported along the road to the last field.

The previous world record was set on grass, not alfalfa, and a mower without conditioner was used. That was clearly an easier task. The DISCO 1100 RC has a conditioner with two V-shaped interlocking polyurethane rollers, which compress the hard stems while simultaneously preserving the precious leaves. This reduces the wilting time required and guarantees maximum feed value, because the leaves are preserved. The conditioner increased the mower’s power consumption, but that did not thwart Tate. During his attempt, Tate mowed 5.24 tonnes of dry mass per hectare. CLAAS will be sending the necessary documents to Guinness, so that the world record can be officially confirmed.